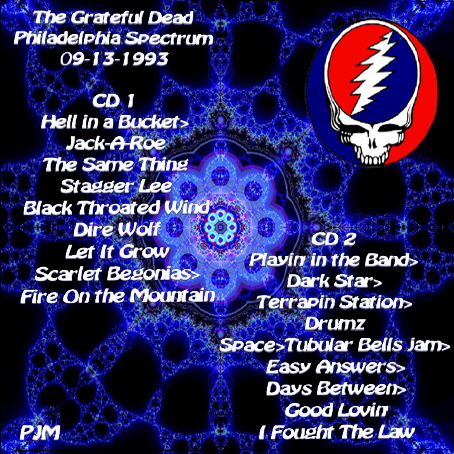 Reviewer: Twinreverb70 - favoritefavoritefavorite - March 25, 2021
Subject: Philly Rocks: Soft Pretzels and LSD
I'm going back through mid-'90s shows I attended to see how they hold up. I gotta say this show is pretty solid. I don't love the crispy tone everyone is sporting, and you can tell the in-ear-monitors are supporting a lack of dynamics. But that said everything is really well played. Jerry sounds engaged. Vince's tone isn't too tinny. There's still some magic here. At the time I really took Brent's death hard. I never really warmed to Vince's playing and tone. He wasn't Brent and I wouldn't accept him. But this is better than I gave it credit for at the time. I still don't like Jer's MIDI tones, but there's not too much here and overall they sound pretty good. Like always, they had their moments. Pretty good, not bad, can't complain.
Reviewer: mariner - favoritefavoritefavoritefavorite - September 28, 2007
Subject: What a treat!
This i thought was just one of those funky shows. Not really sure what got into Jerrys guitar that night but as you read the other reviews there was something special goin on. The 1st set was cool,nothin crazy. The scarlet,fire,playin,darkstar,terrapin i thought was just off the hook. Short version of Dark Star but that was ok. I felt the sound of Jerry during Scarlet,Fire was right out of 1977. A bit disappointed with the song selection after that but i guess the band was in the grove for those songs. All in all one of the best pre drums and space 2nd sets i ever saw. Thanks GD for a great night.
Reviewer: timeofdeaths - favoritefavoritefavoritefavoritefavorite - June 23, 2007
Subject: Jerry's Midi "Acoustic"
In the other copy of this show someone mentions the big man was playing his "Lightning Bolt" guitar which was completely MIDI(Musical Instrument Digital Interface) capable, hence the acoustic sound produced digitally much like the saxophone stuff he busted out with JGB.
Reviewer: Finster Baby - favoritefavoritefavorite - January 3, 2006
Subject: Acoustic?
Maybe it's just me, but it sounds like Jerry is playing acoustic thru most of the show. I was at this show, so I know that he isn't.I'm not sure how he achieved this affect. This is the first I've listened to this one since actually being at the show, and I know it has been over 12 years, but I don't remember noticing this while being there. Any way, I think it adds a different and interesting twist to an otherwise mediocre show. Also, at the time, this was the first show I had seen in a while, so the IFTL encore was actually pretty cool for me at the time.
Reviewer: Spiny Penguin - favoritefavoritefavoritefavoritefavorite - August 29, 2005
Subject: My Oh My!!!
During the opening notes of "Hell In A Bucket," I turned and said to a friend next to me: "They're a LOT more energetic than they were last night!!!"

The first set was standard but high energy, and the x-factor is certainly in play for the second set. I wish the boys went w/a different song post Space (e.g., Wheel), while I Fought The Law as encore was stale by the end of the spring tour, let alone fall, and certainly seemed like a bad terminus of this close-to-stellar show.